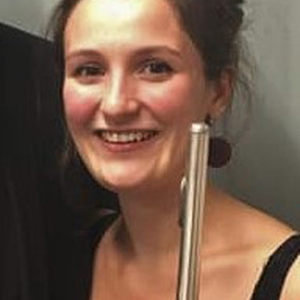 The Belgian flutist, Nathalie Van Meirvenne (°1997) started taking music lessons at the age of 8 years old. In 2014, at the age of 17 she continued her professional studies at the Royal Conservatoire of Ghent with Myriam Graulus. After obtaining her Bachelor’s Degree in Classical Music Performance in 2017 with great distinction, she continued her Master studies with Myriam Graulus and Dorine Schade (Residentieorkest The Hague) in Ghent, where she obtained her Master’s Degree in Classical Music Performance with great distinction in January 2020. During the fall semester of 2018, she studied abroad at The Royal Conservatoire of Scotland (RCS) where she was tutored by Ruth Morley (Red Note Ensemble), Alison Mitchell (SCO) and Janet Richardson (RSNO). Simultaneously with her Performance Master’s degree she studied a Masters in Music Education, which she will complete in June 2020.

Being familiar with all classical music styles and periods, she took a special interest in baroque and contemporary music from a young age, the last one leading to performing several solo, chamber and orchestral pieces and working close with composition students during and after her studies. She is passionate about Asian influenced contemporary music and intrigued by the music of Salvatore Sciarrino. This resulted in writing her dissertation about analysing Sciarrino’s Opera per flauto solo Vol. I and II which was awarded with the greatest distinction. Aside from contemporary music she has a great passion for baroque music and traditional music. In a concert program she always seeks to include different styles and a natural way to connect them. Besides striving after a diversified repertoire she also very much likes to incorporate the piccolo, alto and bass flute and their respective repertoires.

Nathalie took masterclasses with several renowned flutists such as Michel Moragues, Gaby Van Riet, Harrie Starreveld, Carla Rees, Magda Schwerzmann and was recently invited for the Darmstadt summer course in 2021 to study with Claire Chase. As an orchestral musician in student orchestra’s she worked with conductors such as Johannes Kalitzke, Baldur Brönnimann, Azis Sadikovic , Dirk Brossé, … many soloists including Yossif Ivanov, Anneleen Lenaerts, Benjamin Glorieux and composers Jorge Sanchez-Chiong and Dimitri Kourdlianski. This giving her the opportunity to perform in Transit Festival 2014, Ars Musica festival 2018 and Klara festival 2019.

She is currently finishing her Music Education Degree and working as a teacher and freelance musician. She is a founding  member of her newly found ensemble EMC Extend Music Collective. As an ensemble focusing on the contemporary music scene, they perform a broad spectrum of 21st century classical music. EMC aims to embody a stylistic variety in every concert program.