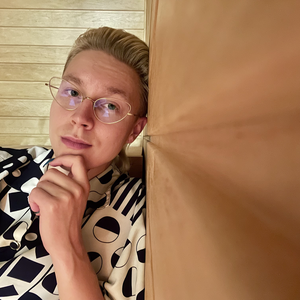 Leevi Räsänen is a 24-year-old, queer Helsinki-based composer, composition pedagogue, concert producer, feminist and organisation activist. Their latest works include e.g. a string quartet dealing with the topics of childhood and memory, written for TEMA and Savonlinna String Quartets and an arrangement of Verdi’s Macbeth for synthesizers. Leevi’s works have been featured in concerts in Korea and USA and on festivals in Finland, Sweden and Denmark, such as Uuden Musiikin Lokakuu in Oulu, What ever works! in Turku and Ung Nordisk Musik in Piteå and Aarhus.

In 2022, Leevi founded the contemporary music festival Pauhu in their home town Enonkoski. He works as the artistic director of the festival. He is also the chairperson for the Finnish contemporary music association Korvat Auki and the Finnish chapter of Ung Nordisk Musik, which is a Nordic yearly festival and platform to promote and advocate young composer’s works and careers since 1946. Räsänen’s oeuvre deals heavily with topics that have sprung up from their personal life. Themes such as mental health, stalking and fear of death have been just some things addressed in their work. Currently, Leevi is interested in bringing queer clubbing and partying vibes to concert halls.