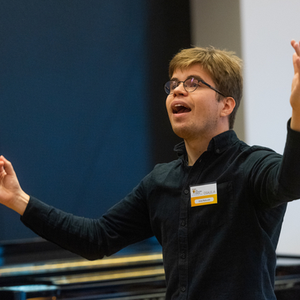 Imre Rohuväli has graduated Heino Eller Tartu Music College in 2013 from the class of Lilyan Kaiv
as a choral conductor. He also studied composition in the class of Alo Põldmäe.
In 2016 Rohuväli received his BA in Estonian Academy of Music and Theatre having studied classical
composing in the class of professor Rene Eespere. In addition he studied orchestral conducting with
professor Toomas Kapten.
As a composer, Imre Rohuväli has focused on chamber music – he has written works from piano pieces
to quartets and quintets. Additionally, his worklist includes music for sinfoniettas and choral music.
His music is generally well-sounding and often tonal. In 2016 he wrote three pieces for Budding Choral
Composers’ Programme (one for a female choir, one for a male choir, one for a mixed choir) which
were all selected by the jury and were performed at the gala concert.
Since 2016 he has furthered MA studies in orchestral conducting with prof. Toomas Kapten.
In 2017 Rohuväli together with his colleague formed a chamber orchestra and „Forgotten
Contempories from Mozart Era“ was a performance to give a start to a new series of concerts.
In spring 2017 he participated in the master class of conducting Estonian Defence Forces Orchestra
with students of Finland Sibelius Academy.
Imre Rohuväli has also participated in several masterclasses of many distinguished conductors such as
Arvo Volmer, Erik Jannsen, Claudi Re, Pablo Marqués Mestre, Toomas Kapten etc.
In spring 2017 Rohuväli took part in preparing Tallinn International Youth Orchestra for their concert
tour in Spain. From autumn 2017 to spring 2018 Rohuväli was a first guest conductor in Tallinn
International Youth Orchestra (TIYO).
Since spring 2019 Imre Rohuväli studied in St Peterburg State Conservatory (ERASMUS+) in the class
of prof Alexander Polichuk.
In the same year Imre Rohuväli graduated Estonian Academy of Music and Theatre master`s
programme as a orchestra conducuctor (cum laude).
In spring 2019 Imre Rohuväli was selected to represent Estonian Academy of Music and Theatre
conducting department in two concerts with Symphony Orchestra of EAMT.
In autumn 2019 Imre Rohuväli participated in the VII Estonian Choral Conductor`s Competition which
had the biggest number of participants in it`s history and recived III prize.
From 2019 to 2020 Imre Rohuväli worked in Estonian National Opera as a assistant conductor and
helped to prepare orchestra and choir for Franz Lehar`s operetta “Der Graf von Luxemburg”.
In spring 2020 Imre Rohuväli was selected to become one of the symphony orchestra conductors in the
next Youth Song and Dance Festival (2022) in Estonia, Tallinn.
Imre Rohuväli has worked with Estonian National Symphony Orchestra, Orchestra of Estonian
National Opera, Opera Choir of Estonian National Opera, Symphony Orchestra of Tallinn Music High
School, Symphony Orchestra of Estonian Academy of Music and Theatre, Tallinn International Youth
Orchestra, Harju County String and Symphony Orchestra, Symphony Orchestra of St Peterburg State
Conservatory, Orchestra of Estonian Defence Forces, Chamber orchestra “La Nova Orchestra” etc.