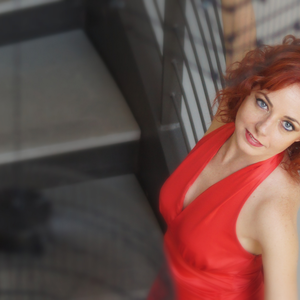 Felicita Brusoni (b. 1986, Italy) is a contemporary soprano, vocal performer and a PhD student in Music with specialization in voice at Malmö Academy of Music, University of Lund (Sweden) carrying on a practice-based research project about extended vocal techniques.
She studied opera singing at the R. Accademia Filarmonica in Bologna (Italy) while obtaining a Bachelor’s Degree in DAMS – Disciplines of Arts, Music and Performative Arts (2010). Then, she earned a Bachelor’s Degree (2014) in Singing, and a first-class Master Degree (2017) in Vocal Chamber Music (focused on Lieder and contemporary music repertoire) from the Music Conservatory in La Spezia (Italy), where she also began to study the French horn.

In 2021 she was semifinalist at Music International Grand Prix and won the 2nd Prize at Concorso Internazionale Città di Massa.
In 2019 she won, in duo with Victor Andrini (bass), the “Special Jury” Prize for the performance of In the sky I am walking (Indianerlieder) by Karlheinz Stockhausen at “Note tra i calanchi” Festival in Bagnoregio, Italy.
In 2018 she won the “Best Singer” Prize at San Marino New Music Project for her performance of the piece for solo voice Jenseits der Sicherheit by Vinko Globokar. According to the composer, this was the best performance ever of the piece.

As well as contemporary music repertoire, Felicita worked with professional singers and ensembles focused on early and baroque music, and sang masterpieces by Bach, Carissimi, Couperin, Händel, Mozart, Vivaldi. She has recorded a CD for Bongiovanni with oratorios by Carissimi (Iudicium Extremum, Jephte).