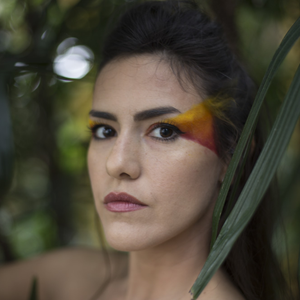 Johanna Vargas numbers among the most versatile and sought-after sopranos in the field of contemporary music. In 2020, the Colombian soprano performed with the Neue Vocalsolisten Stuttgart alongside the Berlin Philharmonic Orchestra under Sir Simon Rattle. A member of the Vocalsolisten since 2020, she has also featured regularly at internationally renowned festivals for contemporary music, performing under the baton of Dennis Russell Davies in Naples, with Peter Rundel and the Ensemble Musikfabrik in Cologne, at the ManiFeste IRCAM in Paris, with the Ensemble Recherche at the Witten Days for Contemporary Chamber Music, and being a regular fixture at the ECLAT Festival for contemporary music in Stuttgart.

Boasting comprehensive training and experience in genres ranging from bel canto to pop music, Vargas commands a range of vocal expression that brought her critical, popular and competitive success from a very early age. In 2015, she was awarded the Hanns Eisler Performance Prize in Berlin, followed in 2018 by the John Cage Prize in Halberstadt and a performer's scholarship at NUNC!3, the third edition of the Northwestern University New Music Conference (NUNC) and Festival in Chicago.

Johanna Vargas' vocal beauty and coloratura virtuosity is matched by a compelling physical and acting presence that is equally at home in theatrical and experimental performance environments as it is with the nuanced demands of chamber and solo performance in the concert hall.

This versatility has led to performances with the SWR Vokalensemble at the Salzburg Festspiel, Frankfurt's biennial cresc... Festival for contemporary music and the Musikfest at the Berlin Philharmonic Hall, as well as with the Ensemble Cantando at the Teatro Colón in Buenos Aires. Vargas gives voice to her own artistic initiative in regular performances as one half of the duo LAB51, in partnership with the pianist Magdalena Cerezo.

Vargas' wealth of experience in opera and music theatre underlines her versatility as a performing artist, covering the full gamut of periods and styles from classical to modern repertoire. In 2020, she appeared in Irrgarten as part of the Neue Vocalsolisten's “Aus dem Home Studio” (From the Home Studio) series, and in Malte Giessen's Frame as part of that year's Eclat Festival in Stuttgart.

In 2018, she performed in Beat Furre´s Opera Begehren (Desire) at the Teatro Colón, Buenos Aires. Her experience in classical operatic repertoire incudes the title rôles in Humperdinck's Hänsel und Gretel and Handel's Rodelinda, as well as Zerlina in Mozart's Don Giovanni, Miss Jessel in Britten's The Turn of the Screw, and the sorceress in Purcell's Dido and Æneas.

Verse IV from per Verse by