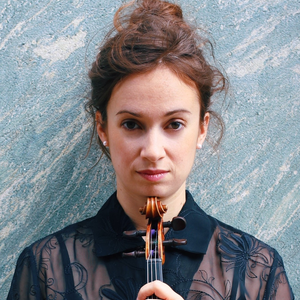 Ségolène de Beaufond began her violin studies at the Conservatoire in her hometown of Versailles when she was six, first under Marianne Piketty, later studying under Igor Volochine. Having obtaining a gold medal for her studies and high graduation marks (with an emphasis on Latin and philosophy), she joined Boris Garlitsky's class at the conservatoire Snational Supérieur de Paris in 2008. She received a scholarship from Bloomington University allowing her to be a student there for a semester in 2012, under Noah Bendix-Balgley, and obtained her Bachelor's degree in musicology from the Sorbonne the same year. An Erasmus exchange scholarship led de Beaufond to the Cologne Hochschule für Musik und Tanz, where she decided to continue her studies and graduated in chamber music n in 2016, and in solo Violin, under Susanna Yoko Henkel, in 2017. As a student she also took part in several master classes, with renowned artists such as Lewis Kaplan, Philippe Graffin and the quartets Ebène, Casals, and Auryn.
Ségolène de Beaufond was a member of the Luzern Festival Academy Orchestra, under Pierre Boulez, as well as several other young orchestras. She is especially dedicated to the performance of chamber music: with her piano trio, Kantilene, she received the Gartow Foundation scholarship, and, as part of the exchange programme xith the Juilliard School, under Ariadne Daskalakis, the Montepulciano Academy scholarship. She performs all over Europe, with diverse ensembles, such as the duos she forms with the pianist Aliya Turetayeva and with the guitarist Tal Botvinik, with whom she recently recorded a CD.
She is active in several orchestras as well: the Folkwang Chamber Orchestra in Essen, as the principal of the Cologne Chamber Opera, as concert master of the Bonn Theater and in the Lower Rhine Symphony Orchestra. De Beaufond has recentrly turned to jazz violin and improvisation as well and has formed a klezmer ensemble.She is a member of the EOS chamber orchestra of Cologne with whom she, along the Trio led by the saxophone player Niels Klein, recorded a CD for Deutschlandfunk.