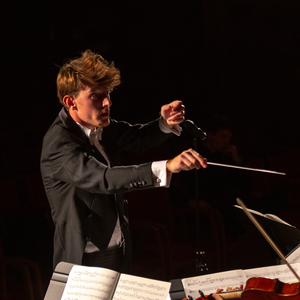 “Maximilian Leinekugel has the potential to overturn many a principle of the classical music scene” (Süddeutsche Zeitung).

With the age of just 20 years the Munich born conductor founded in the beginning of 2016 the MUNICH CLASSICAL PLAYERS, a chamber orchestra consisting of prospective professional musicians studying at Bavarian Music Academies. Since then he has conducted the orchestra in numerous concerts in and around Munich with highlights including performances at the Bavarian State Opera, the Munich Residence and the Bavarian State Chancellery. Particularly his interpretations of Mozart´s Jupiter Symphony and Brahms´ A German Requiem attracted great attention and he was praised by the press as a conductor “who distinguishably bridles to not adorn himself with the glamour of popular classical music hits but rather earns tribute for his special interpretations. In doing so he is credibly suggestive of being an artist for whom every personally shaped music is a fulfilment that he shares with his musicians” (Süddeutsche Zeitung).

Despite his young age Maximilian Leinekugel has been highly active as a conductor. Amongst other he conducted the Athens Philharmonia Orchestra, the Bohuslav Martinu Philhamonic Zlín, the London Classical Soloists and the Kammerphilharmonie Graz. From 2017 to 2019 he was Musical Director of the Animato Orchestra and the Collegium Muwicum at the University of Munich. Furthermore he was assistant conductor of both the production of Britten´s War Requiem led by Martin Wettges and the production of German composer Moritz Eggert´s Fußballoratorium led by the composer himself in the context of the annual music academy of the Studienstiftung des Deutschen Volkes.

Maximilian Leinekugel is especially dedicated to enthusing young people with classical music. In 2018 he initialised and led a youth orchestra project in his hometown Vaterstetten which attracted interregional attention and was broadcasted by the Bayerisches Fernsehen. Under the new name of YOUNG MUNICH CLASSICAL PLAYERS the project will take place in 2020 for the first time in close collaboration with his chamber orchestra. Already in 2018 he was awarded the Tassilo Culture Prize by the Süddeutsche Zeitung for his extraordinary engagement.

Maximilian Leinekugel is an extremely versatile and curious conductor. His repertoire ranges from works by Bach to first performances of contemporary music. Significant in his hitherto conducting activities are performances of stage works by Kurt Weill and orchestral compositions by Paul Hindemith. Furthermore he conducted the first performance of two flute concertos by Anton Adam Bachschmid (1728–1797). Maximilian Leinekugel is insofar an exception amongst the young generation of conductors as besides his conducting studies he also completed a full degree (bachelor and masters) in musicology at the University of Munich focusing on the history and development of symphonic music.

Maximilian Leinekugel received his first conducting tuition by Prof. Ulrich Nicolai at the University of Music and Performing Arts Munich. Since September 2019 he studies orchestral conducting at postgraduate level at the Royal Birmingham Conservatoire. He is scholarship holder of both the Studienstiftung des Deutschen Volkes and the Royal Birmingham Conservatoire Association as well as alumnus of the Bavarian Elite Academy.