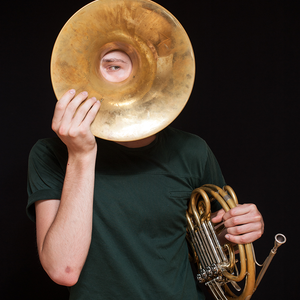 Spencer is an American French Hornist, Composer, Arts Advocate, and Ethnomusicologist. He is a cis-male who is currently residing in Berlin, Germany- at the spot where all the canals in the city merge.

Spencer was trained Classically on the French Horn but turned toward a more contemporary focus while studying with Adam Unsworth. Spencer finds himself most comfortable in spaces where innovation and artistic evolution are at the forefront of the conversation. He truly believes a new perspective or question can exist anywhere. All Art can evolve. This belief has led him to work with a broad range of fantastic humans and artists, such as the emotionally raw pianist/composer Sonya Belaya, the constructively vulnerable arts collective Call Your Mom and the empathetic and conscious Red Shoe Company - where he was previously a contributing member.

Spencer has developed a consistency for performing in Art Galleries, such as performances with members of the Toledo Symphony Horn Section- opening the new Gallery at the Toledo Art Museum- and the fabulous choreographer Sydney Schiff- where in the fall of 2018, Spencer and Sydney premiered a duo for Solo Dance and Horn in the University of Michigan Museum of Art (UMMA).

Spencer’s latest gallery residence is The Ballery in Schoneberg, Berlin, where he is an active performer, curator, and bar socializer.

Spencer strives to be an active collaborator in various art forms outside Classical music. In September of 2019, he produced the music to Dorothea Fischer’s installation, “sobjects”, in collaboration for the generous, supportive, and artistically genuine, Tanztangente Dance Company. Currently, Spencer is a member of the Classical music ensemble the 1781 Collective, with whom he is giving new spaces to Classical Music and creating direct Human reflection and understanding through performance. Multi-sensory stimulation is a key philosophy behind their work, which you can learn more about here.

In 2018, Spencer obtained a Bachelor’s degrees in both French Horn Performance and Ethnomusicology (Music History) from the University of Michigan- Ann Arbor. There he studied with Adam Unsworth, Bryan Kennedy, Lester Monts, Joseph Lam, and Megan Hill. He also obtained a Cultural Certificate from the Conservatory of Beijing in 2018 when he studied the Sheng and performed at the Festivals Inaugural Ceremony.