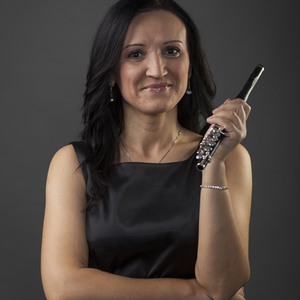 Snježana Pavićević was born in Belgrade, where she graduated and got a master’s degree in flute from the Belgrade Academy of Music in the class of Professor Miodrag Azanjac. In addition to the flute, she also completed a Master study program for the piccolo at the Giuseppe Verdi Conservatory in Milan with Professor Nicola Mazzanti.

Her professional work began playing the piccolo in the Belgrade National Theater Orchestra in 1994. As of October 2002 she has been a permanent member of the Belgrade Philharmonic as solo piccolo. In addition to her ongoing involvement in the Belgrade Phil, she has also collaborated with other orchestras. She has worked with numerous world-famous conductors such as Zubin Mehta, Michail Jurowski, Thomas Sanderling, Muhai Tang, Krzystof Penderecki, Howard Griffiths ….

As a student, she has won numerous awards at national and international competitions in the categories of flute and chamber music.

In addition to her orchestra engagements, she performs as a soloist and in many chamber ensembles with the flute, and more recently with the piccolo in order to promote this instrument in this region. To that end, she has launched a project called the “Piccolo Weekend in the Philharmonic,” which brings together all flute students, as well as young professionals, who want to become more familiar with the piccolo, improve their skills, and keep abreast of world trends with regard to the piccolo.

In addition to concert and educational activities, she has made recordings for Radio Belgrade (Prokofiev: Flute Sonata, Ilievski: Sonatina for Flute and Piano, Francaix: Flute Solo), as well as a CD of music by Australian composer Alan Holley (Hammerings Records, Sidney). She is also preparing a CD with works by Serbian composers for the piccolo.