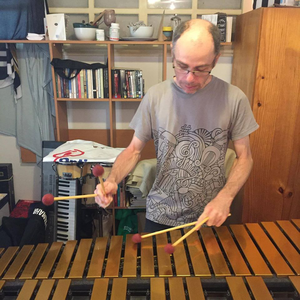 Brad Gill is a composer, percussionist and co-artistic director of the composer-performer collective Sideband as well as member of the experimental improvisation project ‘Mind on Fire’. He began serious musical studies with a focus on xylophone and percussion, later developing an interest in composition, which he explored while a student at the Sydney Conservatorium of Music (from which he has an Honours degree and Ph.D.) and University of Western Australia. During this time he developed an interest in non-Western music, undertaking additional study in Javanese Gamelan and Tabla, as well as studying jazz, resulting in a broad and highly individual compositional and performance style.

​His music has been performed by a range of ensembles and soloists, including the Song Company, Ensemble Offspring, Western Australia Symphony Orchestra New Music Ensemble, Roger Smalley, pianists Kerry Yong and Stephanie McCallum. A number of works have been recorded for broadcast by the ABC. Upcoming works include commissions for a new piece for cello and piano for Daniel Herscovitch and Geoffrey Gartner and for the chamber choir Luminescence.