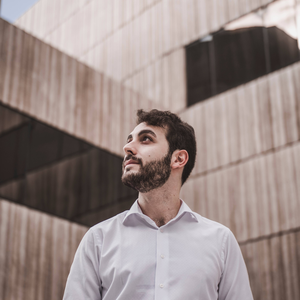 Guillermo started to study music at the age of 9. In 2006 he applied to the conservatory of his city to learn piano with Juan Domingo Tejero. He began Bachelor’s degree in Music Education at Universidad de Jaén (2009) and in 2011 he got a scholarship to study composition at Kean University (NJ, USA), graduating in 2012. The following year he joined to Conservatorio Superior de Música de Aragón (CSMA) in Zaragoza (Spain), where he studied Bachelor’s degree in composition with Jose María Sánchez-Verdú (2013) and Juan José Eslava (2015), obtaining his degree in 2017. In the same year he was accepted in the Hochschule für Musik und Theather “Felix Mendelssohn Bartholdy” in Leipzig, to follow his studies of Master’s degree in Composition with Fabien Lévy. In October 2018 he started an Erasmus+ semester at Conservatorio di Musica “Giuseppe Verdi” di Milano, with Gabriele Manca.

His works have been performed in many cities in Spain (as Madrid, Zaragoza, Pamplona), besides Germany, Italy and Switzerland, and he has also participated in festivals as XXII Temporada de Grandes Conciertos de Otoño (Zaragoza, 2016), After Cage (Pamplona, 2017), Ticino Musica (Lugano, 2018 & 2019) or ZfGM Festival (Leipzig, 2019), working with important ensembles as Ensemble Modern, Neue Vocalsolisten or Divertimento Ensemble.